I don’t think I’ve ready anything quite as original as this. Stuart Turton’s debut novel is about as original an idea as I can remember reading – a clever mix of Quantum Leap, Groundhog Day, and Poirot.

“My mind has gone blank. I don’t know who Anna is or why I’m calling her name. I don’t even know how I got here. I’m standing in a forest, shielding my eyes from the spitting rain. My heart’s thumping, I reek of sweat and my legs are shaking. I must have been running but I can’t remember why”

That’s how it starts. Sometime after the first World War, Aiden Bishop arrives in the forest outside Blackheath House, the scene of a grizzly murder some twenty years earlier. At 11pm that evening, in the middle of a masquerade ball, Evelyn Hardcastle will be murdered, and Aiden will have to find out who did it and why.

If all is not as it first seems at Blackheath House, then brace yourself: Turton has added more layers to this murder mystery than you can shake a stick at. For a start, to solve this murder, Aiden will occupy the bodies of eight different guests at Blackheath House – each with a different connection to the victim, and offering different skills that might help him on his way.

On top of this Aiden is in competition with at least two other people, along with a footman who knows all Aiden’s different guises and is trying to kill them off before he can solve the murder, a maid who could be trying to help him but is probably out for herself, and a man in Plague Doctor mask is laying down the law to our beleaguered and confused protagonist.

Solve it, and Aiden is freed. But if he makes a wrong turn he’s destined to repeat the day over and over until he finally catches the murderer.

See what I mean when I say it’s Quantum Leap, Groundhog day and Poirot wrapped into one? It’s all very complicated.

It’s the most intricately plotted book I can remember – I can only imagine how difficult it was for Turton to write it. The clues, the twists, the way different versions of the same man interact, watching their actions take on different meanings as they’re cast in a different light as the case progresses. If I was wearing a hat while I read it, I’d have doffed it in admiration. How he did it I’ll never know. In my minds eye he stoops over a typewriter, ashtray piled high, waste paper basket overflowing and cups of cold coffee idling, wracking his brain for a way to make it all work – a strange combination of author and mad-scientist.

“How lost do you have to be to let the devil lead you home?”

Whilst the plot takes centre stage, it can overwhelm everything else – sure there’s stuff about our sense of justice (when does justice become vengeance?) and if we can ever really forgive people, but it all plays second banana in a book as thickly plotted as this.

Which isn’t a negative – if anything it make it more fun. Not every book has to say something deep about the human condition – some can be just a fun read. That’s the strength of the Seven Deaths of Evelyn Hardcastle, and it’s all the better for it.

I’d encourage you to read it – its completely original and masses of fun.

So what do you think? Have you read it? Did you like it? Would you recommend it?

If you’re after some quality whodunnits, then there’s a few I’d recommend, but to my mind, you can’t beat a bit of George Smiley: 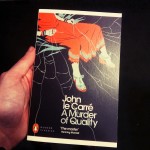 Review: A Murder of Quality by John le Carré - George Smiley is back with the perfect case for these long winter nights...

Though you can’t go wrong with a bit of Sherlock:

Review: Sherlock Holmes in a Study in Scarlet by Sir Arthur Conan Doyle - Sit down by the fire with a good detective book... here are some to get you started

But if it’s books that look at the difference between justice and vengeance, then there’s really only one worth considering:

Review: The Count of Monte Cristo by Alexandre Dumas - Insanely good – this one deserves its place amongst the classics. The tale alone is amazing: a guy gets locked away in a castle on an island, accused of treason by his jealous friend. While he’s there, he plots his escape and plans his revenge. It’s a boys own adventure book, but there’s a lot […]

11 thoughts on “Book of the Month: The Seven Deaths of Evelyn Hardcastle by Stuart Turton”